At ICCF19, as at earlier conferences in this series, there were several papers on the results of LENR other than heat production.  Chemical analysis methods were used before and after experiments to gain evidence for transmutation reactions.  They are summarized in this section, starting with two poster papers related to radioactive isotopes.

Vladimir Vysotskii from the Kiev National Shevchenko University and three colleagues from Russia studied experimental transmutation of 133Cs to 134Ba in media supporting the growth of methanogenic bacteria from sea sludge. The microorganisms were cultivated under anaerobic conditions at 30°C in an aqueous nutrient medium. Controls had no sea sludge, that is, none of the bacteria thought to add a proton to the Cs to produce Ba. Samples from the cultures were drawn and analyzed at 48, 94, 144 and 192 hours. The data showed a monotonic decline in Cs and monotonic growth of Ba. The rate of transmutation was computed from the data to be about 10-6 synthesized Ba nuclei per second per 133Cs nucleus. That value is two orders of magnitude greater than the team’s earlier experiments with the same system. It is comparable to the rate for conversion of Mn to Fe obtained previously by the group. We note that the transmutation work described at ICCF19 with a non-radioactive isotope of Cs does not guarantee that biological transmutations, presumably due to LENR, can be used to remediate the radioactive isotope 137Cs. However, earlier experiments by this group showed the rate for bio-transmutation of 137Cs to be 10-6 synthesized 138Ba nuclei per second and 137Cs atom.

Leonid Urutskoev and four co-workers from the Moscow Institute of Physics and Technology and the Prokhorov General Physics Institute reported on the possibility of induced alpha decay in heavy nuclei due to the deformation of electron shells caused by strong magnetic fields. They produced high-current electrical explosions of titanium foils in solutions of uranium salts. Mass, Gamma and Alpha Spectroscopies were used to monitor the results. Depletion of 238U was found to exceed depletion of 235U. 4He was measured in the gas phase, and “significant thermal heating of the explosion chamber was observed.” The authors stated that their results confirmed other experiments at the General Physics Institute in which laser ablation of 197Au nanoparticles suspended in a solution of uranium salts produced similar depletion of 238U. They attribute both results to the strong magnetic fields due to the high currents that exploded the foils. In their view, those fields “significantly distort the atomic shell and thereby initiated the α-decay.”

In one, Ubaldo Mastromatteo from A.R.G.A.L. in Italy irradiated thin films of Pd on a Cr adhesion layer on a Si wafer in an H2 atmosphere with low power lasers. A 1 mW 633 nm laser and a 3 mW 403 nm laser were employed for the two-week irradiations. The samples were examined before and after the runs with a Scanning Electron Microscope having an X-ray analysis capability. The virgin samples had a few defects due to the evaporation process that produced the Pd films, and showed mainly X-ray peaks due to Pd and Cr. After the runs, the samples exhibited cavities around which “significant percentages” of light elements were observed. Strong X-ray lines from O, Al, Si and K were measured. The results were said to be similar to those of other researchers in “different contexts and with different materials.” If not due to contamination, the “nuclear fission hypotheses will have to be seriously considered.”

Max Fomitchev-Zamilov posted a paper entitled “Apparent Synthesis of Nitrogen and Oxygen from Heavy Hydrocarbons: The Case for LENR.” He used 5.6 kg of the oil Kendex 0842, and degassed it at 80°C at 50 µHg for 5 hours to eliminate the possibility of atmospheric contamination.  Then, the oil was subjected to “extreme hydrodynamic cavitation” for some unstated time. That caused the production of 5 gm of N, which out-gassed to form 3.6 liters of gas. The 22 gms of O reported to be formed reacted with the oil to form resins. The author surmised that the production of N and O was due to LENR with addition of protons to carbon and nitrogen, respectively. No radiation or heat production was observed during the experiments.

A. Gromov and colleagues from Russia and Italy reported on the formation of Ca in reactions between Al and N in AlFe2O3 thermites. The combustion products from three types of experiments in which Al and N reacted showed “abnormally high concentrations of Ca (up to 0.5 mass %) as determined by Energy Dispersive X-Ray and Inductively-Coupled Plasma Mass Spectroscopies. In an experiment in which molten Al was jet sprayed into a N2 atmosphere, the increase in Ca content averaged 600% compared to the starting materials.
The authors posited a nuclear reaction and compared it to the chemical reaction of Al and N. 13Al + 7N gives 20Ca and about 5 x 1028 MeV per mole. This is about 10 million times the chemical energy of burning Al in nitrogen.

Renzo Mondiani from Italy reported on transmutations by an electrolytic cell having copper electrodes. With a “low to medium” concentration of K2CO3, he reported the formation of 32S16 by fusion of two 16O8. However, in a “high concentration” of the solution, he determined that a fission reaction occurred, namely 39K19 – 16O8 → 23Na11. For intermediate concentrations, which reaction dominated depended on the size of the anode. The first reaction was primarily for small anodes and the second for large anodes. The results of the first reaction could be determined visually due to gas volume changes. In both cases, unstated types of chemical analyses were used to establish the reaction products. Those analyses also showed production of Mg, presumably by a fission reaction: 39K19 – 14N7 → 25Mg12. 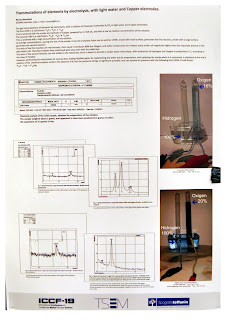 F. Ridolfi from the Universita degli Studi di Urbino “Carlo Bo” reported on the results of ultrasound irradiation of iron and steel bars. Damage to the sample surfaces, neutron bursts and observation of unexpected elements resulted from the ultrasound. The cavities were less than or about 10 µm in diameter. K, Cl and Cu were found, and the 63Cu/65Cu ratio was in the range of 0.3 to 1.7, rather than the normal value of 2.2.

D.S. Baranov and O.D. Baranov from a private laboratory INLEAS in Moscow did experiments on application of “strong” electric fields to bismuth salts. They gave the following summary of results, but did not cite the analytical methods employed to determine these values: “The elemental composition of substances emitted from the sample was radically different from that of the initial bismuth salts.
There were found some different elements: carbon (up to 90%), zinc (up to 6%), potassium (up to 2%), calcium (up to 2%) and aluminum (up to 5.5%),” plus tin and titanium in unspecified amounts. The authors interpret these results as evidence for “giant long-lived nuclear molecules” and state further that “It is assumed that in nuclear molecules some nucleon transfers are possible.”